Just before the Belgian Grand Prix next weekend, two Formula 1 teams took part in the traditional Bavaria City Racing event in the city of Rotterdam in the Netherlands. Ferrari and Mercedes GP had sent their Formula 1 cars to the city to entertain spectators who visited the already seventh edition of the hugely popular event.

According to local authorities, a record 600,000 spectators gathered in Rotterdam city center to witness a seemingly endless parade of racing and rally cars, but most were only interested in one. thing: Formula 1 cars. This was the first time Ferrari had taken part in the event, after taking part in the Bavaria City Racing event in Moscow last month, the Italian team had sent two cars and the driver to test and reserve Marc Gene in Rotterdam, while British GP2 driver Sam Bird represented the Mercedes GP team.

The event requires massive organization, and the construction of the five km long track and all the safety barriers and grandstands in the middle of one of the largest and busiest towns in the Netherlands has been compared the construction of the Monte Carlo track for the Monaco Grand Prix. , except in Rotterdam, the organization only had two days and not two weeks to complete the circuit.

Organizer Herman Vaanholt on the event, “For this year’s edition a dream has come true for us, Scuderia Ferrari, the most successful Formula 1 team have agreed to send two cars to Rotterdam, for us the icing on the cake in the seven years of history of this event. Sunday was one of the best editions of the place, and I also want to thank the hundreds of volunteers and curators and the city of Rotterdam for their efforts.

The city racing ‘formula’ is so popular that next year a similar event will be held in Dublin, Ireland and the organizers had invited the former Formula 1 team owner and now BBC expert and commentator. Eddie Jordan, who was particularly impressed with the number of spectators who came on Sunday. The flamboyant Irishman performed in the VIP Village atop Willems Bridge with his band Eddie Jordan and the Robbers, and at the morning press conference couldn’t resist giving one of his controversial comments but still fun when asked about Michael Schumacher’s return to Formula 1. 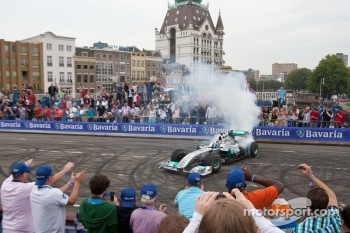 “This sport has many champions. And as for Michael Schumacher, he’s really an old jerk at this point, ”Jordan said. And to add: “He should give way, he had his time, he played seven world championships, I have been talking about it openly for a very long time. He’s a very successful driver, the most successful in the history of our sport, but someone needs to talk to him to get out of the way because it’s time for other guys to have their chance.

But spectators had not come to Rotterdam for Jordan’s comments, but for the racing cars which quickly took possession of the city center. The city running track runs through the heart of Rotterdam from the crest of the Willems Bridge where the start and finish line is, to the Hofplein roundabout and from there it returns to the Willems Bridge. In the past, the event had occasionally been hampered by heavy rain, but this year it has remained dry and sunny and several tens of thousands of spectators have lined up on the track to cheer on their racing heroes. With the last Formula 1 race taking place at the Zandvoort circuit in 1985, the Bavaria City Racing event is now the only chance for Dutch fans to see a Formula 1 car in action.

Gene was the first Formula 1 driver to venture onto the narrow track, but the Spaniard got a little over-excited and damaged the 2010 Ferrari F10 while making a few donuts in front of the fans. He hit the barrier backwards, not hard, but just enough to damage the left rear suspension and had to abandon his demonstration. As Ferrari had brought two cars, Gene was able to make a second demonstration in the 2009 Ferrari in the afternoon, this time everything went well and Gene completed three laps, much to the delight of the fans who relished the sound of the Ferrari engine echoing. through the streets.

Gene on his experience, “To participate in this event, as requested by our sponsor Santander, means it was the first time in Rotterdam for me and for the Ferrari Formula 1 car.” He was also impressed with the circuit: “Compared to my previous experiences, this is the longest track I have ever seen on a road show – and also the most twisty – generally, during this genre. event, you see long straight lines as you drive. in both directions, but here the layout of the track is reminiscent of a real circuit and allows you to really test the speed and braking zones. 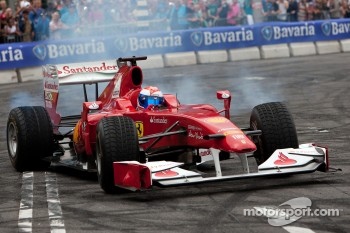 Indeed, this year Gene recorded a top speed of 297 km / h in the straight line of the Coolsingel and he paid tribute to the organizers: “I must convey my compliments to the city of Rotterdam and to the organizers of the event, who knew how to design such an interesting circuit on these streets which are normally reserved for city traffic, giving fans the chance to see a Formula 1 car in real action.

Anthony Davidson would originally drive the Mercedes GP car, but broke his collarbone in a bicycle accident just a week before the event and was replaced by Mercedes’ protégé Sam Bird, who donated a steamy demo in Rotterdam. After getting out of his car, Bird was excited about the track. “What a great way to get around a city! Bird said with a big smile on his face. “Better than taking a train or a bus, isn’t it?” What a great experience and what a great host Rotterdam has been! I want to thank all the organizers and the hundreds of thousands of people who came here today, I think it was a very successful event, ”he commented.

Frenchman Alexander Premat had been invited to drive a very special single-seater in Rotterdam: the Formulec electric racing car which was developed in collaboration with Mercedes GP. The electric single-seater is a project of the future and has an incredible 300 hp on board which accelerates the car from 0 to 100 km in just three seconds. Apart from the environmental aspects of the Formulec, the car has another advantage, it is fully automatic and does not have a gearbox, which makes it light and easy to drive.

For a racing driver, a special feeling, there is no engine noise and the car is completely different. Premat on the electric formula car, “I would say you hear and feel the wind in this car more and your car hears the friction between the motor and the driveshaft very well.” Asked about the future of the project, Premat replied: “There is a championship planned for 2012 or 2013, but we have to find investors for this project. In the future, it could certainly turn out to be a very interesting racing series. And if they need more testing, I will definitely be available for that. 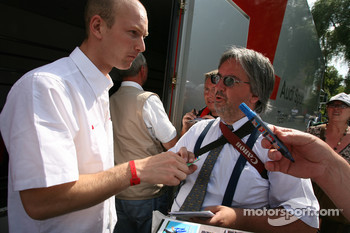 Dutchman and former Formula 1 driver Robert Doornbos, who drove for Red Bull and Minardi, also demonstrated in his Superleague Formula race car and was cheered by his Dutch fans. Doornbos, who was born and raised in Rotterdam, was also active in the IndyCar and ChampCar series and finished third in the 2007 Champ Car Championship.

Doornbos demonstrated in by far the loudest car on Sunday, his 12-cylinder, 750-hp Formula Superleague car. After signing his signature on the city’s tarmac in the form of numerous donuts, Doornbos finished his demo atop the Willems Bridge, got out of his car, and became the hero of the day throwing his gloves into the crowd. 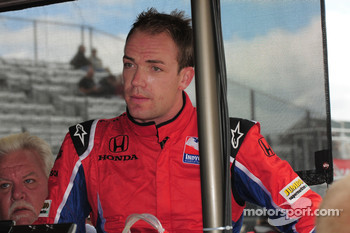 “What a great experience it is,” he commented. “The enthusiasm of the fans, unbelievable, it was really cool!” And to add: “It seems that every year more and more people come to this event, and they get more and more wild, and they want to see more and more donuts every year.”

But more importantly, the spectators got to witness a spectacular spectacle, they really enjoyed the experience of the screaming engines of the city center, a real family outing, and even Gene brought his little son and daughter to Rotterdam and the Spaniard was able to walk quietly around the city with his family without being harassed by photographers or journalists, for him and his family it was also a day out.

And with a similar event now in Dublin next year, the street races in Moscow and above all in Rotterdam, with the participation of 600,000 spectators, prove that Formula 1 is still alive and well, even in a country that has not. not seen a Formula 1 Grand Prix for 26 years.