Sam Watson and Emma Finucane walked away with British titles to their name after both winning the British National Young Cyclists Circuit Racing Championships.

Milton Keynes hosted the event with runners racing a 2.3km circuit as they battled to be crowned the best in the country.

And while Watson and Finucane won the U16 titles, it was Eva Young and Joe Kiely who were successful in the U14 categories.

After showing his strength in the early stages, he held on fire until the final laps, where he launched a long attack.

Dan Barnes accompanied him, but Watson pulled him off his wheel and it was left to Alfie George to triumph in the peloton’s sprint for second place, 11 seconds behind the winner.

“Getting this win is pretty special for me,” Watson said. “I’m also leading the National Series right now, so today means a lot to me.

“I knew I couldn’t get over the sprint so the plan was to hang in there and continue with a few laps remaining which obviously worked.”

Last year’s Under-14 champion Finucane simplified the progression to the older age group as she proved to be the strongest rider in a group.

As the riders failed to make a breakaway throughout the race, it all boiled down to a straight sprint.

Winner of the last round of the Youth Circuit Series, Kate Wootton fell victim to a late fall, giving Finucane a chance to cross the line at the top of the group, and she did not miss.

“It’s an incredible feeling to win today,” said the champion. “It was pretty tough the whole race, the riders kept trying to attack, then they got chased, then another attack, so it was tough all day.

“I really wasn’t in the best spot for a good part of the race, but I managed to make my way to the final sprint.

“I went a bit too early, got the wheel from Lucy Naylor to help me and I continued. “

Part of a three-way breakaway with Finlay Pickering and Josh Charlton, winner Kiely timed his attack to perfection to secure the victory in under a second.

Pickering launched the early attack alongside Josh Giddings and Jack Brough, but to no avail as they were brought to heel by a now fragmented peloton.

Kiely then left, taking Pickering and Charlton with him, as the decisive blow was struck and the trio began to increase their lead.

Max Poole made a valiant effort to close the gap to the top three with just four laps to go, but he finished alone in fourth place as Kiely rallied to beat his fellow breakaways in the sprint to the line .

Young’s pace in the sprint was just too much for the rest of the field to handle, as she won by almost half a second on Milton Keynes roads.

With no one able to pull away from the field at the start, it was Kinga Ingram who launched an attack with four laps to go, but it was recovered and counter attacks followed.

Anoushka Milane took a chance, but again the attack did not last, and when Ingram’s late dig in the last lap was neutralized, only Young was left to take the sprint into a lunge. for the line.

3. Oli Rees at the same time 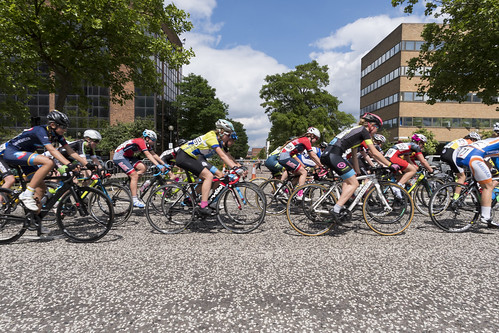